A new clip has been released for the J.J. Abrams and Steven Spielberg collaboration Super 8. The sci-fi flick is a nod to the early years of Amblin Entertainment, which produced kid classics like The Goonies and E.T. the Extra-Terrestrial.

Super 8 is a standout among this summer’s sequels and comic book movies. 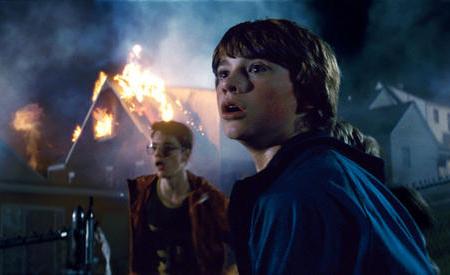 It’s based on an original idea, it’s led by a cast of unknown child actors (with the exception of Elle Fanning) and it’s set in the late ’70s. When you take all that and mix it with an alien threat, you’ve got popcorn movie magic!

In the latest clip from Super 8, a group of kids are rocked to their core when they witness a massive train crash in their small town. The event leaves them shaken (not stirred) when they discover some precious cargo in one of the box cars.

In typical Abrams fashion, there’s a lot of camera glare (a la Star Trek), and there’s plenty of clean-cut action. The clip leaves you wondering, what’s in the box car? What does it look like? And why is it so strong?!

You’ll have to wait until June 10 to get your answers when Super 8 opens in theaters everywhere. We, for one, cannot wait to see what comes from the minds of Steven Spielberg and J.J. Abrams.