Penelope Cruz was pregnant while filming Pirates of the Caribbean: On Stranger Tides. Luckily, she had her look-alike sister to fill in as her body double during those tricky sword-fighting scenes! 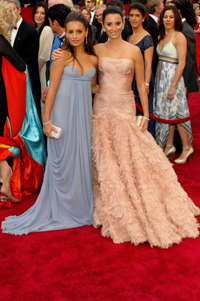 Penelope Cruz found out she was pregnant with her first child before filming Pirates of the Caribbean: On Stranger Tides, however, director Rob Marshall had a plan for concealing her pregnancy during the shoot — Penelope’s sister Monica!

Monica, 34, is an actress and dancer in Spain — and looks just like 37-year-old Penelope — so it was a perfect fit.

“I did a couple of months of training and did what I was able to do, but I couldn’t do everything, just what was safe. Monica came at the end to do some scenes. She’s a dancer and very good with a sword because she’s done a film herself,” said Cruz.

Marshall enjoyed having both Cruz sisters work on the film. “Towards the end of the shoot we asked Monica to help us out for some of the shots because we needed a different silhouette, so the whole family got to work on the movie,” he said.

Cruz took over for Keira Knightley in the fourth installment of the hit Pirates franchise. The new mom was excited to work with Johnny Depp — and reportedly agreed to do the movie before she finished reading the script!

She and actor Javier Bardem welcomed their first child, a boy named Leo, in January. “From the first second, you feel so much love. It is a revolutionary experience,” Cruz gushed to Vogue. “That’s the best way I can describe it. It transforms you completely, in a second. Nature is very wise and gives you nine months to prepare, but in that moment — when you see that face, you are transformed forever.”

Check out our Pirates of the Caribbean: On Stranger Tides interview with Johnny Depp here >>