Former Real Housewives of New Jersey cast member Danielle Staub has a new job — as a stripper. The former housewife and mother of two is taking off her clothes at a New York strip club. 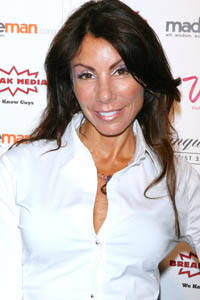 Now that Danielle Staub, 48, is no longer raking in the big bucks as a reality TV star on The Real Housewives of New Jersey, she’s taken her career in a different direction.

This isn’t the first time Staub has stripped. She was a dancer at a Miami gentleman’s club two decades ago. More recently, she appeared in a celebrity sex tape.

The scandal-prone Staub has signed a three-year deal to appear at the club and on the club’s website.

Stripping won’t be Staub’s only source of income. She’s also slated to appear in an upcoming VH1 reality TV series with Heidi Montag from The Hills and Jake Pavelka of The Bachelor. The program will follow the trio as they attempt to open a restaurant together.

Before she became famous, Staub had a scandalous past in Florida. Charles Kipps’ Cop Without a Badge details Staub’s dealings in the criminal world. In the book, Staub is quoted as having said she had sex with 1,000 men.

These days, Staub isn’t the only celebrity making money from stripping. Actor Channing Tatum’s past stint as a male stripper is being turned into a movie directed by Steven Soderbergh.

Last week, it was revealed Staub’s newest boyfriend is reality TV star and musician Ray J. No word yet on what Ray thinks of his lady’s latest gig.