Ahhh, teenage angst. As she prepares for her new role on The New Girl, actress Zooey Deschanel is reflecting back on herself at age 17 and sharing a heated letter she penned to the fashion magazine Vogue. 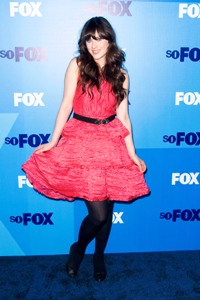 The year was 1997, and an impassioned Zooey Deschanel had a bone to pick with the fashion magazine Vogue. Rather than sit idly by while the glossy pages filled with stick thin models gave the real women of the world the finger, Zooey put pen to paper.

At the age of 31, and now married to Death Cab for Cutie rocker Ben Gibbard, Zooey Deschanel stumbled across her Vogue rant of 14 years ago and shared the piece (which was published by the magazine in the letters to the editor column) with her Twitter fans:

“Why would you want to limit the spectrum of beauty to an ‘ideal’ when you, as a popular women’s magazine, have the opportunity to expand it? I don’t think any woman should have to feel as if she needs to shove herself into an ‘ideal’ to be beautiful.

“Beauty should be something that is celebrated and something that is enjoyable, not something that people should feel uncomfortable about achieving. Most of the women, and certainly most of the adolescent girls, in the United States do not feel completely secure with themselves, especially with their appearance; is insecurity something you want to advocate? As American women, we don’t need discouragement, but inspiration.”

Zooey then tweeted, “No hard feelings Vogue magazine, love your mag! I was a feisty 17,” adding she is “proud of my feminist teen self.”