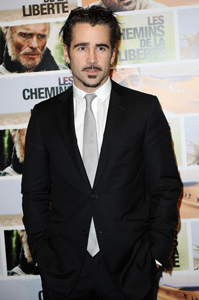 The seven-year-old son of Colin Farrell was the topic of conversation when the actor chatted with talk show host Ellen DeGeneres. James was diagnosed with Angelman Syndrome, a rare form of cerebral palsy — a condition discovered because of the child’s obsession with water.

“James is kind of obsessed with water,” Farrell told DeGeneres. “He’s not a great swimmer but he just loves being close to it and in and around it. It’s one of the characteristics of the condition that he has.”

“The doctor saw him one day and said, ‘Is he always this happy… and does he always kind of flap his arms like that?’ And we said, ‘Yes.’ And he said, ‘And how does he feel about water?’ and we said, ‘Oh, water’s fascinating (to him).’ He went, ‘Has he been tested for Angelman Syndrome?’ We didn’t know what that was.”

The rare condition is characterized by developmental delays and severe speech impairment. Most children with the disorder don’t walk until they are past their third birthday, while some never walk at all. Many, like Farrell’s son James, have happy temperaments and an obsession with water.

“If James gets upset at home I can get a pot and put some water in it. It’s really beautiful because water is such a pure element… there’s something really profound about it,” Farrell said.

James was born to Farrell and his ex-girlfriend Kim Bordenave in September 2003. The actor has another son, Henry (born in October 2009), with actress Alicja Bachleda-Curus.