The Office star Jenna Fischer is pregnant with her first child! Get all the baby details here. 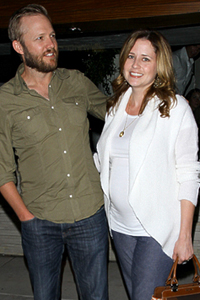 Jenna Fischer is pregnant with her first child with her husband, writer Lee Kirk — and she has her sister to blame. The 37-year-old star of The Office admitted that becoming an aunt gave her major baby fever.

“I already wanted kids, but even more so now,” she told People.com.

Besides being an aunt, Fischer has some experience being a mom as her Office character Pam Beesly had a baby with her on-screen husband Jim, played by John Krasinski. “Pam is just out of her first trimester but isn’t really showing yet,” Fischer said back in 2009. “The cool part about playing Pregnant Pam is that my real-life sister Emily is pregnant… I find out how she’s feeling, what she’s going through. It’s the best resource ever!”

The actress has been married since last July (and even had Survivor host Jeff Probst officiate the wedding), however, you won’t always find her wearing her wedding ring.

“I always see these tabloid reports about certain people being ‘Spotted Without Their Wedding Ring!’ like it’s some big deal,” she says, admitting that she doesn’t wear hers when she is working because she doesn’t want to worry about it getting stolen out of her trailer. “Break-ins happen all the time. So if I go someplace after work I could be ‘spotted’ without my ring. It means nothing.”

No word yet on how far along Fischer is in her pregnancy — but from the looks of her cute baby bump, I would guess she is in her second trimester.