Androgynous male model Andrej Pejic is the center of a gender-bending controversy: The cover of Dossier magazine, featuring the shirtless model, is being censored in American stores. 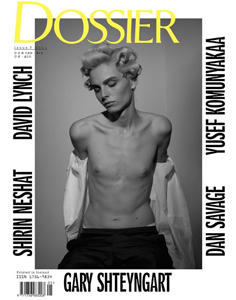 Male model Andrej Pejic looks a little too much like a girl for the owners of Barnes & Noble and Borders, according to reports. The retail giants have requested that this month’s issue of Dossier magazine, featuring the androgynous model taking off a dress shirt, be censored.

According to Elle.com, “Katherine Krause, Dossier’s Editor-In-Chief, says that both bookstores have been made aware of Pejic’s gender but will move forward with the censoring.”

“It’s a naked man on the cover of a magazine, which is done all of the time without being covered up, so I definitely don’t think it merits this, but I understand what it is,” Skye Parrott, Dossier co-founder and Creative Director told the Huffington Post. “It’s not a coincidence that it’s only the giant U.S. chain stores that are asking us to do this… It’s only the American copies that are being censored.”

“But that’s part of what’s interesting about the cover, I think, is that it’s playing with those ideas of gender roles.”

Unfortunately the magazine will have to cover the cost of the black plastic bags the book chains are requesting — and magazine budgets are stretched incredibly thin as it is.

What do you think of the Andrej Pejic Dossier cover? Is it too risqué for the USA?