Renee Zellweger is rumored to be dating John Mayer on the down-low. If she is, that makes Mayer the second Jennifer Aniston ex she’s dated. The first was Bradley Cooper. 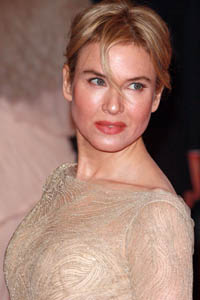 According to a report in the Globe, actress Renee Zellweger is dating musician John Mayer. If that turns out to be true, that would make Mayer the second guy Jennifer Aniston has dated that Zellweger has bagged.

Who was the first? Bradley Cooper, who Zellweger broke up with in March and is rumored to be dating Aniston now.

Last month, rumors started circulating that Cooper has been dating Aniston after his breakup with Zellweger. Stories about Cooper and Aniston as a romantic item date all the way back to 2009.

“Jen always had a soft spot for Bradley, and she thinks he is very attractive and charming,” a source said of the two. “Jen appreciates that Bradley is low-key, loves dogs and is focused on his movie career.”

If Zellweger and Mayer are a couple, could this be Zellweger’s revenge on Aniston for dating Cooper? Mayer and Aniston broke up in 2009 after dating for a year.

Reportedly, Mayer and Zellweger have been dating “quietly” in New York and Los Angeles, when their schedules allow. Purportedly, neither is looking for a serious commitment.

“She’s looking for a good time with a hot guy,” a source said. That may be for the best. Mayer isn’t exactly known for his ability to stay committed.

Over the years, his romantic conquests have included Jessica Simpson, Jennifer Love Hewitt and Minka Kelly.