Carla Bruni, the wife of French President Nicolas Sarkozy, was doing a fine job of keeping her pregnancy under wraps — that is until her 82-year-old father-in-law spilled the beans. C’est la vie! 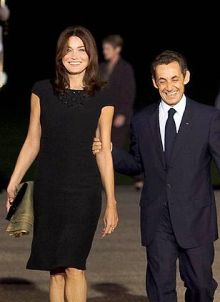 Still trying to fill the void left by all the royal wedding excitement? Perhaps an international baby bump watch is just the thing to cure what ails ya. France’s President Nicolas Sarkozy and wife Carla Bruni are having a baby!

The news, kept tightly under wraps until now, has been confirmed by a member of the president’s own family. Pal Sarkozy spoke a little too freely with a German newspaper and has gone and confirmed that Carla Bruni is in fact pregnant.

People reports the 82-year-old, already a great-grandfather, told the newspaper, “Neither wants to know the gender beforehand, but I’m certain it will be a girl, and beautiful like Carla.”

The French first lady is expecting her first child with the president at the age of 43. The couple wed in 2008 and each has children from previous relationships. Carla Bruni, a former model and singer, is the mother of 10-year-old son Aurélian, while Sarkozy is the father of three boys and the grandfather of one.

Speculation about Carla’s pregnancy began in late April when the first lady was spotted at a maternity store in France. So far there still is no official word on the pregnancy or information on when baby Sarkozy is due.

Look for Carla Bruni in Woody Allen’s new movie Midnight in Paris, which is confirmed to be due in theaters May 20!