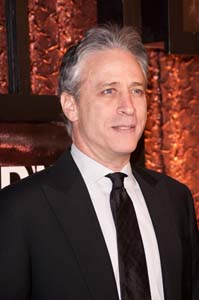 What happens when a rap star is invited to the White House? Fox News pundits go nuts. The invite has been a hot topic of conversation on The O’Reilly Factor on Fox News, and Jon Stewart has been countering their arguments on his own The Daily Show.

The pair, who often good-naturedly debate political subjects, stepped it up a notch last night when Stewart appeared on The O’Reilly Factor to continue their argument.

O’Reilly’s stance: The White House should not be extending invitations to artists who were “celebrating a cop killer,” referring to Common’s A Song for Assata about convicted murderer and former Black Panther Assata Shakur.

“What I think he’s doing is not celebrating, but honoring someone he thinks was wrongly convicted of cop-killing. I think he believes she was convicted unjustly,” argued Stewart. “Correct me if I’m wrong, what you’re saying is, if an artist supports someone that has been convicted of killing a cop, they should not be allowed to go to the White House.”

“I am saying that when a president invites someone [to the White House]… the resume has to be put in front of them and they have to select someone who [is] almost unimpeachable,” O’Reilly responded.

“Guess who wrote a song about Leonard Peltier? Bono. Guess where he was?! The White House,” Stewart countered. “Booyah. That’s a rap word.”

“Bob Dylan wrote a song about a convicted killer named ‘Hurricane’ Carter,” Stewart continued. “He’s been to the White House. Why are you drawing the line at Common? There is a selective outrage machine here at Fox that pettyfogs only when it suits the narrative that suits them.”

“This guy is in the crosshairs in a way that he shouldn’t be,” he continued. “You have to be consistent with your outrage.”

“You know this guy is sympathizing with two cop killers. You know that,” O’Reilly shot back. “That’s enough for a sitting president to say, ‘You know what? This guy might be radioactive. I’m not doing it.'”

“Let’s do something nice for police for National Police Week,” Stewart suggested to O’Reilly. “Let’s have us agree to promote a reinstatement of the ban on assault weapons — because that doesn’t celebrate killing cops metaphorically or physically, it tries to get weapons that kill cops — literally — off the streets.”

“That’s important,” Stewart said, “this is nothing.”

Listening to Stewart explain his position to Bill O’Reilly is always so entertaining, like listening to a parent explain to a three-year-old why he can’t have cookies for dinner.