Dancing With the Stars hit the semifinals round this week, forcing each dancer to bring their A-game in three different dances. Once again it was Chelsea Kane edging past Hines Ward on the leader board.

The semifinals of Dancing With the Stars gave Hines Ward, Kirstie Alley, Chelsea Kane and Ralph Macchio a chance to dance three different dances — two choreographed numbers and a cha cha cha presented in group form. Once their individual dances were completed, there was a cha cha cha to the death. We know, it gets confusing at this point in the competition. Here’s how the contestants stacked up as they inched closer to the mirror ball trophy. 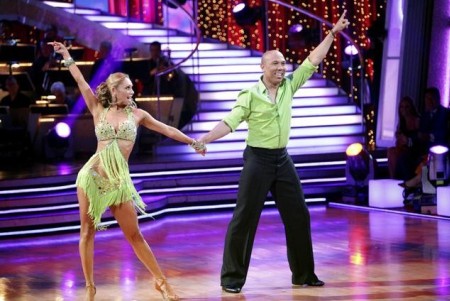 Chelsea Kane and Mark Ballas crept to the top of the leader board with a fancy-footed Argentine tango and a rumba that Len Goodman felt very strongly about: “Tonight, you have fulfilled your potential. You’re there!” He was really loving Chelsea Kane tonight.

Everyone was wondering how Kym Johnson and Hines Ward would do after her tragic fall that we saw over and over and over again. Well, second place and a perfect 30 on their Argentine tango tells us exactly how she was doing. We have to make mention of Bruno Tonioli’s take on their Argentine tango: “Every emotion was out there for the taking. The battle of will between the man and the woman. Who’s going to be the dominant partner? Ah, it was like group sex — you never want it to end!” Wow, Bruno, wow. Did we also mention they got a perfect 30 on their salsa?

Kirstie Alley’s Viennese waltz was beautiful and special. There was nothing ordinary about it. She killed the paso doble and ate the floor alive with her passion. Again, another quote from Bruno: “That wasn’t a paso doble, that was Dance Trek 12, the Wrath of Kirstie! You were really going like a force of nature!” We loved him last night! Kirstie Alley is pulling in high scores like mad lately, so she could be the dark horse.

We really thought Ralph Macchio was going to pull it together, but somehow he ended up just bellow Kirstie Alley on the bottom of the leader board. His and Karina Smirnoff’s Argentine tango was lifeless at some points while his salsa was a bit too out there! Not sure what’s happened to him over the weeks (besides his injury).

The cha cha cha for bonus points was weird, but here it goes. Hines Ward and Kym Johnson went against Ralph Macchio and Karina Smirnoff with Ward taking the round.

Next, it was Kirstie Alley and Maks Chmerkovskiy against Mark Ballas and Chelsea Kane with Kane taking the round.

What did you think of the Dancing With the Stars semifinals round?