Jennifer Aniston’s 15-year-old dog Norman, who was her constant companion, has died. “He was an old dog and it was just his time,” her rep says. 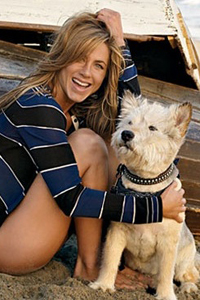 Jennifer Aniston’s Welsh corgi-terrier mix dog died at the age of 15. The dog was her companion and she even took him on set with her.

“He’s my baby boy,” she told People.com. “Norman goes with me on location — I’ve got to take Norman.” In fact, Aniston brought Norman with her during an appearance on Chelsea Lately! As the crowd cheered for Norm, Aniston tried to get him to sit. “He’s 15 years old, he doesn’t care anymore,” Aniston joked.

Aniston loved Norman so much she bought her $4.95 million New York apartment under the name Norman’s Nest Trust. She said that Norman loved taking naps at her feet. “Even back [as a puppy] he was as cool as a cucumber,” she said. “He’s just a person in a dog suit.”

Kind of like Marley in Aniston’s movie Marley & Me, Norman did get in trouble by running away from home for two days in 1998. He luckily turned up in a dog shelter.

Norman will be missed not only by Aniston, but also by her other dog — a white German shepherd named Dolly.