Joey McIntyre is adding a baby girl to his growing brood! 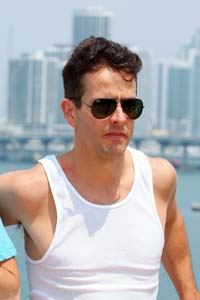 It’s hard to believe that New Kids on the Block singer Joey McIntyre is old enough to have children, let alone three! But, that’s exactly what’s happening with the baby-faced star: His wife, Barrett, is expecting the couple’s third child — and it’s a girl!

McIntyre confirmed the news this weekend on the NKOTB cruise to the Bahamas, according to his rep. The McIntyres already have two boys: Rhys and Griffin.

It looks like McIntyre will be in good company when NKOTB teams up with the Backstreet Boys for the NKOTBSB tour this summer. A bunch of the guys have kids now — crazy, since most of them were just tots when they started with their respective groups.

Who else is a dad?

Brian Littrell has one child, Baylee, 9. The little Littrell suffers from Kawasaki disease, an inflammation of the arteries that usually only affects children.

Jordan Knight has two sons: Dante and Eric with his wife, Evelyn Melendez.

Howie Dorough is a relatively new daddy: His wife, Leigh, gave birth to their son, James Hoke, in May 2009.

Whoa! Wonder how many buses they’d need if all the NKOTBSB boys brought their kids on the road.

Are you pumped for the NKOTBSB tour this summer?