While many reports claim the Jersey Shore cast has thus far been well behaved during their stay in Italy, an attentive ear heard otherwise this morning. During Ryan Seacrest’s ‘The Sleaze’ report we heard that some of the cast has been racking up some hefty driving fines! 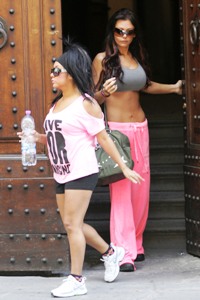 While the Jersey Shore cast hasn’t been up to their usual drunken antics (not yet at least) during their visit to Italy, the group has apparently gotten into some trouble over their driving habits. Italian officials are none too happy with the speed and reckless nature of the cast when behind the wheel, and they’ve started issuing tickets.

As we heard reported on Ryan Seacrest’s morning radio show, the Jersey Shore cast is already up to $350 in fines for both speeding and reckless driving!

Two of the Jersey Shore females are seen here leaving a gym, determined not to let all the history and culture their new home has to offer interfere with their tanning and workout regimen. JWoww made the most of the attention sun by neglecting to wear a shirt with her sports bra and hot pink pants, while Snooki threw back to the ’80s with a cut-out t-shirt.

The men of the Jersey Shore (Ronnie Ortiz-Magro, DJ Pauly D and Mike ‘The Situation,’ pictured below on Sunday, May 15) also hit the gym, as well as took time to get some shopping in. Reportedly, the cast most often frequents the 99-cent store and they have stocked up on Italia t-shirts. 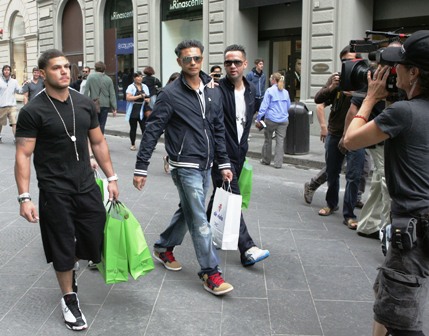 Let’s hope the cast is saving some of their lira to pay off those driving fines. The Jersey Shore cast is already in debt to Italy and they’ve still got weeks to go!