Nick Jonas was spotted this weekend on the arm of an older pop singer. Is he into older women now? 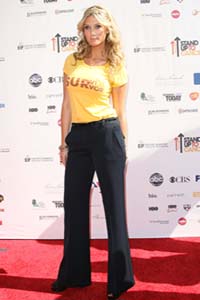 Remember when Nick Jonas was just a wee li’l thing? Well, those days are gone now: Jonas is now 18 and rumored to be dating a much older woman.

Jonas was spotted holding hands with Australian singer Delta Goodrem outside Hollywood’s Arclight Cinema this weekend. The two have been working together on new tracks for the Aussie’s new album.

“Loved creating with the incredibly talented @nickjonas and @greggarbo,” Goodrem tweeted a couple of weeks ago.

Awww. Young love is so cute, isn’t it? Except for one thing: Goodrem is 26; Jonas is 18. Yeah, yeah — large age gaps aren’t anything new in Hollywood, but their eight-year age difference makes us raise our eyebrows. After all, people change a lot between 18 and 26. What can they possibly have in common besides music?

So, just who is she?

It looks like we’ll be hearing a lot more about the pop singer in the coming months. Dancing With the Stars fans might recognize her name — she killed it when she stood in for an ailing Adele on last week’s results show.

Goodrem also starred on the Australian soap opera Neighbours — the same show that made Natalie Imbruglia a star. She also just broke off her four-year engagement to former Westlife singer Brian McFadden two months ago.

Sorry, Nick. You know what that means: You’re just a rebound dude. Enjoy it, though!

Do you think Nick Jonas and Delta Goodrem will make it as a couple?