ABC’s Dancing With the Stars has stolen the nation’s number one spot from American Idol for two weeks running! Sure, Idol still rules the coveted 18 to 49-year-old ratings scene, but DWTS season 12 is giving the Fox juggernaut a run for its money this season. 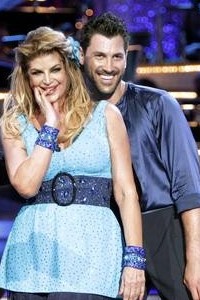 Dancing With the Stars lured in 21.4 million viewers with its May 2, 2011 performance episode, topping the Wednesday and Thursday American Idol episode ratings for the second week in a row. DWTS‘ killer ratings have knocked Idol from its longstanding spot at the top of the TV food chain!

Dancing With the Stars cannot, however, celebrate total domination. In fact, it’s still not winning where it counts. American Idol is killing DWTS in the battle for the 18 to 49-year-old viewers, which is what advertisers care about. NBC’s The Voice is also beating DWTS with that coveted audience.

Nonetheless, while American Idol‘s new judges gave the show the boost it needed to stay in the game during its tenth season, this will go down as a big win for DWTS.

One key factor in DWTS‘ big win has to be season 12’s dancing stars, themselves. Positive players like semi-finalists Kirstie Alley, Ralph Macchio, Hines Ward and Chelsea Kane proved to be more attractive to viewers than last season’s slate of notorious tabloid faves. Just because folks like Bristol Palin or Kate Gosselin can steal headlines and get their own reality TV show doesn’t mean fans want to watch them — let alone root for them! — on a feel-good show like Dancing With the Stars.

One LA Times blogger also suggests DWTS and ABC have the Charlie Sheen drama to thank for their win over American Idol’s last two episodes. The theory there is that the Two and a Half Men repeats are making room for DWTS to draw a bigger audience.

The Two and a Half Men drama won’t, however, be a factor in the next season’s races, which will see Fox not only counting on American Idol to perform, but also Simon Cowell’s new X-Factor.

In the meantime, we’re back to a new Monday: What will you be watching?