Guitar master Carlos Santana has some harsh words for politicians in Arizona and Georgia. Where did he air his grievances? 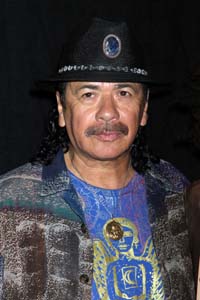 Musician Carlos Santana is known for speaking out more with his guitar rather than his mouth. However, Santana put down his guitar Sunday and spoke out against Arizona and Georgia governments during an Atlanta Braves and Philadelphia Phillies game.

Santana was at the game to accept the Braves’ Beacon of Change award during the team’s fifth annual Civil Rights Game when he blasted the states for passing anti-immigration laws. Georgia passed an immigration law that allows law enforcement to demand proof of legal immigration from people they suspect are not originally from the United States. Arizona passed a similar law in 2010.

“The people of Arizona, and the people of Atlanta, Georgia, you should be ashamed of yourselves,” Santana said. He’s not the first celebrity to use their fame to speak out against the Arizona immigration law: Ricky Martin, Shakira and Lady Gaga have all voiced their disapproval. Eva Longoria, Rosario Dawson and Wilmer Valderrama also issued statements blasting the Arizona government.

“This law is not correct. It’s a cruel law, actually,” the rocker continued after the game. “This is about fear. Stop shucking and jiving. People are afraid we’re going to steal your job. No, we aren’t. You’re not going to change sheets and clean toilets…”

Santana, 63, immigrated to San Francisco from Tijuana, Mexico, in the early 1960s.

“This is the United States. This is the land of the free. If people want the immigration laws to keep passing, then everybody should get out and leave the American Indians here,” he continued.

Some are already criticizing Santana, but he said he’s speaking out for people who cannot.

“I am here to give voice to the invisible.”

Do you agree — or disagree — with Carlos Santana’s criticisms?