You know you have made it when you get a pregnancy rumor going around about you! Friday singer Rebecca Black responds to rumors that the 13-year-old is expecting a baby. 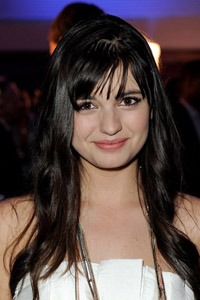 It’s official. Rebecca Black has made it. The 13-year-old Friday singer had her own “celebrity bump watch” when a rumor started over the weekend that she was pregnant. CNN iReport then picked up the story before it was deleted.

So, are we going to see Black on the next Teen Mom?

“I thought it was May 15th… not April Fools Day,” Black tweeted. “I’m absolutely NOT pregnant.”

Whew! Glad we got that taken care of!

So, now that we know kids are out of the picture for now (luckily!), what is next for Rebecca Black? The singer has reportedly earned $1 million in iTunes sales from Friday and her YouTube video has millions of hits! She has hired a publicist and manager and has reportedly been contacted by record labels — so maybe we can get songs for the rest of the week, too!

She also said that she would love to perform a duet with Justin Bieber and has multiple celebrity fans, including Lady Gaga and Simon Cowell!

In case you missed it, check out the Friday video that made Rebecca Black a star!