Reports have surfaced that Lindsay Lohan may have been out partying last night and had a little too much fun. Fellow club-goers say Lohan was “belligerently drunk.” The result was a fracas. 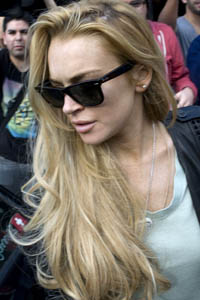 Did troubled starlet Lindsay Lohan get drunk and get into a fight with a woman at a Hollywood club last night? That’s what reports are saying happened when Lohan was at Paul & Andre nightclub in Los Angeles in the wee hours of this morning.

Allegedly, a woman inside the club attempted to take a photo of Lohan, and the actress was having none of it. To stop her, a source says, Lohan grabbed the woman by the wrist. Then someone from Lohan’s entourage grabbed the woman’s point-and-shoot camera and dumped it into an ice-filled champagne bucket.

“We didn’t press charges because we thought it was funny at first,” said a male eyewitness, who was seated at the table next to Lohan’s with the woman who owned the camera. “We all were drunk.”

“Lindsay appeared to be ‘belligerently drunk,'” he continued. “She and her people were doing shots of something all night. She looked like she was falling all over the place. She was being stupid.”

The woman was taking Lohan’s photograph when Lohan grabbed her. After that, another woman in Lohan’s party, the source says, stated repeatedly, “I need that camera,” and then grabbed the camera and dumped it in the bucket.

The group figured Lohan’s friend’s attempt to destroy evidence of Lohan partying had worked, “but then we figured out when we got home that the camera was broken because water seeped in. The memory card, though, was still good.”

Now, the pics are making the rounds online. Surely, the last thing Lohan needs is more trouble. She was in court last week for violating her probation and was released from rehab in January.

Regarding last night’s incident, her publicist said, “I don’t have any knowledge of this alleged incident whatsoever.”

Will Lindsay ever stay out of trouble?

6 mins ago
by Julia Teti