Why did Simon Cowell choose Paula Abdul as one of his judges on X Factor? Is it because she is sweet and easy to work with? Nope! Find out what Cowell reveals about his new X Factor judge. 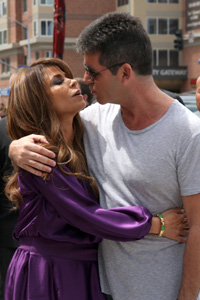 Simon Cowell and Paula Abdul seem to be a match made in TV heaven. He is as biting and sarcastic as she is sweet and goofy. They seemed to have great chemistry when working together on American Idol — that is, until she was booted off the show and replaced with Kara DioGuardi.

Cowell is excited to have his judging partner back for his new X Factor reality show. He says that one of the things that drew him to Paula (or, Pauler, as he calls her in his English accent) is the fact that she can hold her own with him!

“What’s interesting is she’s snappy,” he said in an interview. “She doesn’t like you to disagree with her. And there were one or two disagreements. But that’s why we wanted her on the show. I think it’s important that everyone has their own viewpoint. But she is good at spotting talent. I mean I thought she was really on it the last two days and I said to her afterwards, this is the best I’ve seen you in a long time.”

Cowell, who was recently on the list of Britain’s wealthiest people, said that the American public also wanted Paula back.

Cowell and Paula will also be joined by British singer and TV personality Cheryl Cole and producer L.A. Reid on the X Factor.