Brad Pitt, star of the freshly premiered film Tree of Life, isn’t afraid to admit that the Christian faith he grew up with didn’t always agree with him. The actor, who calls religion ‘stifling,’ received both applause and boos at the premiere of Tree of Life. 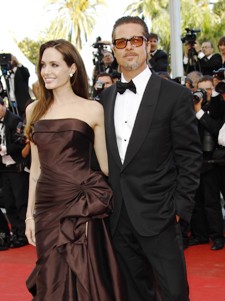 Brad Pitt and partner Angelina Jolie, seen here at the Cannes International Film Festival for the premiere of Tree of Life, are no strangers to unconventional ways. So is it any surprise that Brad, the father of three adopted and three biological children, struggles within the confines of one religion?

“I grew up with Christianity,” Brad Pitt, who was raised in the Midwest in a family of Southern Baptists, explains. “Some things worked for me and some didn’t.”

Reflecting on his childhood teachings, Brad shared in a press interview, “I grew up being told that ‘God is going to take care of everything and it doesn’t always work out that way; and if it doesn’t, that’s God’s will.’ I’ve got my issues.”

He continued, “Many people find religion gives them opportunities. I found it very stifling as an individual and a tightness to it that the father character carried with him.”

Tree of Life, a film set in the 1950s in which Brad Pitt stars as a strict father raising three boys, received both applause and boos at its recent Cannes premiere. The Wall Street Journal reports, “The impressionist film interweaves the story of the family’s growth and personal tragedies with surreal cosmic interludes, complete with extended sequences charting the universe’s creation and the earliest forms of life on earth, from jellyfish to dinosaurs.”

A turn towards more artsy films is no accident for the actor. “About 10 years ago, I started thinking about my favorite films, and they weren’t the big commercial things,” Brad said. “They had more depth and they were asking a lot of the big questions.”

The big question of this moment is: Will you be going to see Brad Pitt in his latest work, Tree of Life?