Neve Campbell has finalized her divorce from John Light — a process that began as a super-secret move. 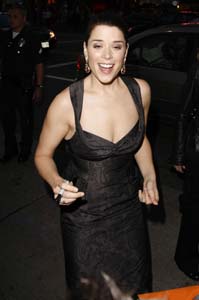 Scream 4 star Neve Campbell is single and ready to mingle again — her divorce from British actor John Light has been finalized.

Campbell surprised everyone when the divorce news was picked up by TMZ in November, because she had actually filed on the sly five months earlier. Now, nearly a year after that filing, Campbell is free to leave her wet towels wherever she wants.

The actress and Light submitted a confidential settlement agreement to the court, divvying up the marital property. While the details are unknown, Campbell did originally ask the judge to deny Light any spousal support from her.

This is Campbell’s second divorce. Her first marriage, from Canadian actor Jeff Colt, ended in 1998. She married Light in 2007. The couple has no children together.

Neve has wasted little time moving on: Since last fall she has been tied to Old Spice pitchman Isaiah Mustafa and Centurion actor JJ Field.

Look for Neve Campbell in the upcoming films The Glass Man and Singularity, due out later this year.