Cali Swag District rapper M-Bone — famous for the hit Teach Me How to Dougie — has been brutally murdered in a drive-by shooting in Los Angeles. 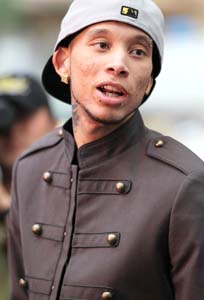 M-Bone, member of the rap group Cali Swag District that rose to fame for their hit Teach Me How to Dougie, was murdered last night in a drive-by shooting in the Los Angeles neighborhood of Inglewood.

The 22-year-old hip hop star, whose real name was Mante Talbert, was apparently just in the wrong place at the wrong time. Witnesses say M-Bone was in the driver’s seat of his car outside of an Inglewood liquor store when another car approached and someone inside fired two shots, hitting M-Bone in the head and killing him instantly.

While cops aren’t confirming the victim as M-Bone until they notify next-of-kin, his bandmate Smoove confirmed the news on Twitter:

“Ma life changed drastically in the. Blink of an eye rip mbone.”

M-Bone will live on forever on the Internet, though — check out this video of him teaching you how to Dougie: