After two years of no communication, Rihanna and Chris Brown are following each other on Twitter. Is Rihanna setting a bad example for her young fans or is it much ado about nothing? 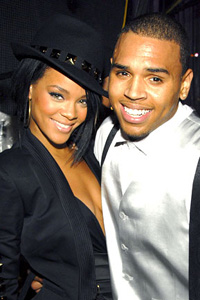 One concerned fan tweeted to Rihanna:

“I never thought you would go back to him! You better not, it’s your life but you do have ppl that look up to you. e.g. young girls.”

She then apologized, tweeting: “Babygirl I’m sorry, I didn’t mean to hurt or offend u! Just needed to make it clear to the Navy!”

MediaTakeout.com is also reporting that Rihanna and Brown sent a dozen private messages to each other.

Brown has completed a domestic violence program the last two years and seems to be getting his career back on track, but many people wonder what kind of example Rihanna is setting by communicating with Brown. ?Plus, ??Brown’s anger issues ??remain in question after his recent outburst on Good Morning America??.

Rihanna seems to be ready to let the past go, as she recently downgraded her restraining order against Brown which would allow them to have contact with each other — as long as he does not “annoy, molest or harass her.”

Twitter drama aside, Rihanna is gearing up to kick off her Loud tour in Maryland on June 4.