In a revealing new interview, Britney Spears dishes on life with her boyfriend, how being a mom has changed her and what her greatest weakness is. But would she marry again? She says maybe. 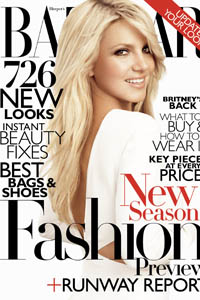 Britney Spears would marry for a third time, she says, when asked in a new interview with Harper’s Bazaar. As for kids, she wouldn’t mind having a few more of those either.

“Would you like to get married again? More kids?” the interviewer asks, to which Britney, who has been dating Jason Trawick for two years, replies, “I’ve thought about both, so if the timing was right…”

The pop star, who appears on the magazine’s cover in a white dress, is in a positive place these days. According to the profile, “she is busy singing, dancing, and ‘It’s Britney, bitch’-ing in preparation for her summer tour.”

Of her new album, Femme Fatale, Spears says, “I’ve worked so hard on this album, so it’s really refreshing.” She adds, “I feel like I’m drinking a tall glass of homemade sweet tea on a really hot, beautiful day.”

She also talked about the scandal she caused when she kissed Madonna at the 2003 MTV Music Awards and what life lessons she’s learned from the Material Girl.

“I actually saw [Madonna] a couple of weeks ago at a party,” Spears reveals. “I guess she’s really taught me to stay true to myself. That seems like a simple thing to say, but she taught me through action, not just by saying it.”

A few years ago, Spears was in a very different place. She shaved her head, lost custody of her kids and attacked a car with an umbrella. It’s clear she’s come a long way since then.

“I’m pretty normal, you know?” she says of her life these days. Now, her perfect day is playing with her kids, eating snow cones and spending time with her boyfriend.