Glee‘s episode Funeral is finally here, but we still don’t know who’s in the casket! Your guess is as good as ours.

Glee is going to suffer a loss this week in the new episode Funeral, but we’re not quite sure who’s meeting the Grim Reaper. Ever since the photos of the Glee funeral scene began floating around the Internet, we’ve been wondering who was going to die. 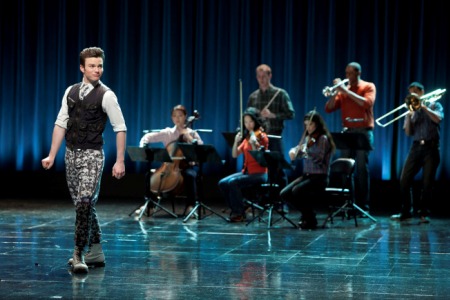 While we still don’t know who, we can tell you that the New Directions kick their Nationals strategy into high gear this week. Word has it that not only will a person die, a favorite couple will also see the end.

We also haven’t seen the last of Jesse St. James. The kids of the New Directions get a little help from Rachel’s (Lea Michele) former love, although Finn (Cory Monteith) isn’t too happy about it.

Glee is set to take on Amy Winehouse’s Back in Black. In exciting news, Kurt (Chris Colfer) will cover Pure Imagination from the hit movie Willy Wonka & the Chocolate Factory! Is anyone else completely over the moon about this news? We know Chris Colfer will completely transform this song into a modern-day wonder — or will he? Maybe he’ll pay tribute to its original take.

Who do you think will die in Glee’s episode Funeral? Do you really think the end of a relationship is coming? Sound off in the comments section.