American Idol finalist Scotty McCreery gets the surprise of a lifetime, thanks to country superstar Josh Turner.

Country superstar Josh Turner showed that he has the ability to make even the most hardened cowboys cry when he showed up to perform with American Idol finalist Scotty McCreery at the 17-year-old’s hometown show Saturday. 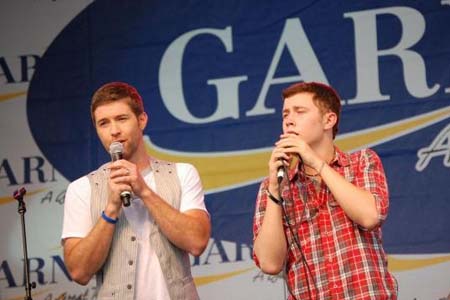 Here’s how it went down: McCreery was performing a cover of Turner’s Your Man for his Garner, North Carolina fans when the audience suddenly went wild. He didn’t know what was happening until he turned around and saw Turner.

“Oh my God!” McCreery yelled when he realized it was Turner.

“All these people are here for you,” Turner told McCreery. “I had heard you never sang this song with a band before and were a little bit nervous, so I decided I would bring a few of my guys in.”

It was adorable — the sort of syrupy-sweet moment that brings tears to your eyes. The deep-voiced duo continued their impromptu collaboration with Long Black Train. Turner has said that he’s rooting for McCreery to win it all on Idol.

Turner also hails from North Carolina, so it was sweet that he turned out to help a hometown musician make his break into the country world. He’s popular in country music thanks to his sexy, deep voice (and he’s not too hard on the eyes either).

And as for McCreery? He deserves to be in the top three — he’s humble, sweet and cute in that “aww shucks” sort of way.

Expect to see all of this on American Idol Wednesday, but check out the video too.