Johnny Depp is a prince among men, and it turns out he actually has royal blood! The actor is related to the British royal family. 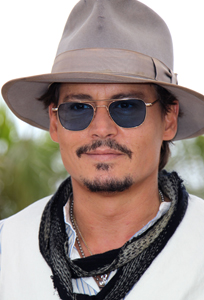 We always knew Johnny Depp was a prince, but it turns out he actually has royal blood!

Nick Barratt of the fascinating show Who Do You Think You Are? did some digging and found out that the Pirates of the Caribbean star and Queen Elizabeth II share a great-times-19-grandfather — making them 20th cousins!

Yes, that family connection is rather tenuous at best, but it’s there all the same!

“When I examined Johnny’s history I discovered a likely connection to the royal family,” Barratt told the Daily Mirror.

“I’ve since established the ­family tree that demonstrates how. You have to go back more than 500 years to reach the point where his ancestors become royal.”

Depp and the Queen share a common ancestor in Lady Margaret Percy, who was a direct descendant of King Edward III. That’s where the similarity ends, though: While the Queen was brought up in a life of privilege, Depp was born into a middle class Kentucky family.

Depp is currently in Cannes promoting Pirates of the Caribbean: On Stranger Tides.

read on for more johnny depp