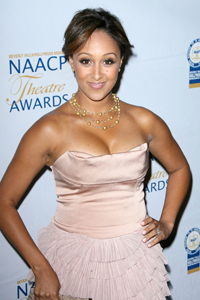 The couple took advantage of the gorgeous setting and held their ceremony outdoors, where they exchanged traditional vows, according to People.

“I’ve always wanted an outdoor wedding with lots of flowers,” Mowry told the magazine. “I feel so lucky to have this beautiful day marrying my best friend.”

The 32-year-old actress, who starred in the hit show Sister, Sister with her twin Tia Mowry, wore three different outfits on her special day: A Carolina Herrera gown for the ceremony, a two-piece Dolce & Gabbana outfit for the reception and a Herve Leger dress for the after party inside the vineyard’s barrel room.

“You can tell they’re best friends,” said the couple’s wedding planner Mindy Weiss. “They have a great mutual respect for one another.”

Look for both Tia and Tamera in their upcoming reality show, Tia & Tamera Take 2, this summer on the Style Network.