Five years after James Frey set off one of the biggest controversies in The Oprah Winfrey Show history, the author of A Million Little Pieces has returned to talk with Oprah in a no-holds-barred interview. What did he have to say five years later? Read on to find out.

In 2005, Oprah Winfrey chose James Frey’s book, A Million Little Pieces, for her book club. When the Smoking Gun website revealed some details in his book weren’t true, Winfrey went to bat for him. Unfortunately, she was wrong. 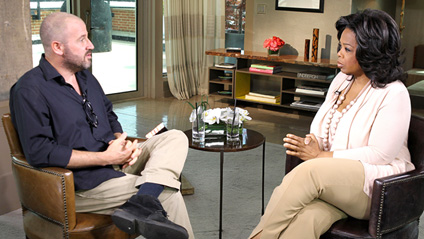 In January of 2006, Frey appeared on The Oprah Winfrey Show and admitted he had not been truthful in the book. Winfrey’s response was, “I feel duped. But more importantly, I feel that you betrayed millions of readers.”

Five years later, in an interview set against the backdrop of New York, James Frey has returned to The Oprah Winfrey Show.

Frey revealed to Winfrey that he hasn’t seen much of his 2006 appearance on the show. “I think of it as a personal car crash for me. And I just don’t want to watch it.” He added, “It definitely wasn’t my finest day.”

When asked about what he was feeling after he was confronted by Winfrey on the 2006 show, Frey said, “I was feeling shock and definitely stunned. I just wanted to get home.”

When asked if he ever cried over the controversy surrounding A Million Little Pieces, he admitted, “No, I’ve never shed a tear about it.” He said there was “anger, confusion and embarrassment” and that “it was a moment to moment thing.”

Winfrey asked if he thought she had been too hard on him and Frey answered, “I thought I got ambushed, absolutely. In a lot of ways, I didn’t think it even mattered. In some ways, I deserved it.”

According to Frey, the book never started out as a memoir, instead it was thought of as a novel and it just spiraled to a point where he got swept up in it. In regards to doing it all over again, he said, “I would have been honest in the promotion of it from day one. If I could do it over, that’s what I would do.”

What did you think of James Frey’s appearance on The Oprah Winfrey Show five years later?