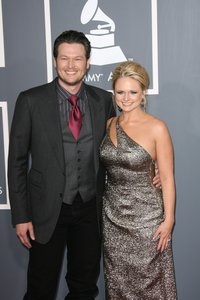 Miranda Lambert and Blake Shelton were married at the Don Strange Ranch in Boerne, Texas on May 14. The couple said “I do” in front of an estimated 550 guests including singer Kelly Clarkson.

Clarkson gushed on her Facebook page Sunday, “So I went to Miranda and Blake Shelton’s wedding last night and it was the greatest wedding/reception I’ve ever been to!”

She added, “I feel as though they should renew their vows every year and throw a party as well because everything about it was awesome!”

Other A-list celebrities on hand to watch the king and queen of country exchange vows were Reba McEntire, Martina McBride, Dierks Bentley and Charles Kelly.

Lambert kept her wedding day style in the family by donning her mother’s wedding dress while walking down the aisle.

Miranda Lambert gushed to Us magazine after the wedding, “I’m married to my best friend! Looking forward to a lifetime of laughter.” Her new hubby added, “I wanted to be married to Miranda the day I proposed. Finally, it’s official.”

The beautiful bride chose to serve her guests a special dish to feast on — venison she harvested herself. Dating since 2006 and engaged since last May, this was definitely a party in the making for Blake Shelton and Miranda Lambert!

Congrats go out to the newlyweds!