It turned out to be Friday the 13th indeed, as ABC announced it was canceling a number of dramas from its lineup, including Brothers and Sisters, V, Off the Map and more.

Brothers and Sisters was just one of the shows on the chopping block as ABC announced which shows would be returning next season. 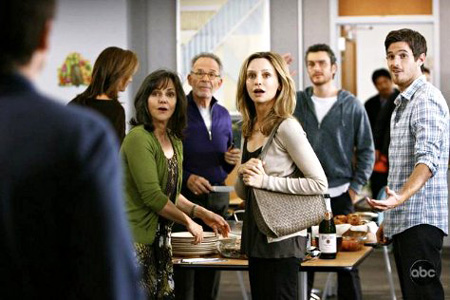 The hour-long drama, which starred Sally Field as the matriarch of the Walker family, had been on the air since 2006, and many, including the actors, felt like it was time to go. They aired their finale last week.

Actor Matthew Rhys told EW that the show has “run a lot of extreme stories and big stories, so I personally wouldn’t want to be a writer if I had to stretch it another season.”

Off the Map, No Ordinary Family and Detroit 1-8-7 were all new dramas that didn’t pull in the ratings needed to make the cut.

The rebooted series V, about aliens invading Earth, did not capture the same audience it did the first time around and was sent back to space.

Matthew Perry may have known about his show’s fate when he announced on Thursday he was going to rehab to focus on his sobriety. His new sitcom, Mr. Sunshine, just got rained on as ABC announced this show would also not be renewed.

Tell us: Are you surprised that ABC canceled the shows listed above?