What can we say about Simon van Kempen’s debut single, I Am Real, while following the Golden Rule? Not every middle-aged white guy has the guts to put on shiny blue pants and belt out his musical passion live for the Internet to devour. He’s brave. There, that’s nice. 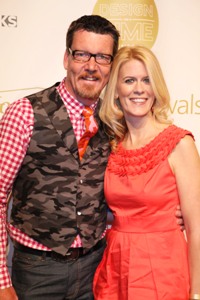 Simon van Kempen is apparently making a run at a second career. The husband of Real Housewives of New York alum Alex McCord has debuted his first single, I Am Real, by performing live on a tiny stage under a disco ball.

A sampling of the lyrics (as best as they could be heard) follows below:

Here in reality
I practice duality
I kiss and hug

As I Am Real concludes, Alex McCord joins her husband on stage. Show host Andy Cohen can be heard saying, “Wow, Simon. I can’t believe that… that was really something.”

What do you think of Simon van Kempen’s music video debut?