Dancing With the Stars pro dancer Kym Johnson had a scare today when she was rushed to the hospital after taking a nasty fall.

Blame it on Friday the 13th? Kym Johnson, 34, and her dancing partner, Hines Ward, had an accident while rehearsing today for their Dancing With the Stars performance. 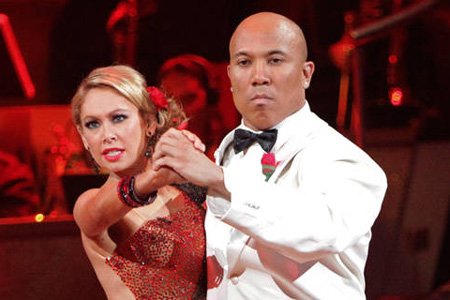 Johnson, a pro dancer on the show, reportedly had an accident during rehearsals. An ambulance was called on location and Johnson was taken out in a stretcher with an oxygen mask on her face, reports E! Online.

Sources say she was rushed to a local Los Angeles hospital for treatment. ABC Entertainment spokeswoman Amy Astley said that she “was taken to the hospital for precautionary measures, to assure she is OK.”

“She’s doing OK,” her rep was quoted as saying to E! News. “Better safe than sorry.”

Johnson and her dancing partner, NFL athlete Hines Ward, have gotten good reviews throughout the season — and no word yet on how this accident will affect their upcoming performance.

Ralph Macchio suffered a ruptured knee cyst and tendonitis last week, however, he made it into the final four despite a shaky performance. Kirstie Alley and Chelsea Kane round out the final four on Dancing With the Stars.