Watch out, Italy! The entire cast of Jersey Shore has fist pumped their way into Florence. Their first order of business? GTL! Finding a gym, tanning salon and laundromat, of course. 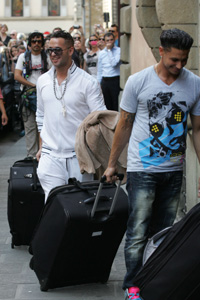 Season four of Jersey Shore has started with a bang (or shall I say, a fist pump) as the entire cast is now in Italy where they are settling into their Florence home.

During their time in Italy, the Jersey Shore cast, including Snooki, JWoww, Deena, Sammi, The Situation, Vinny, Pauly D and Ronnie, will be working at a pizza parlor called O’Vesuvio Pizzeria.

I wonder if Ronnie will introduce the Italians to his famous Ron Ron juice? If so, he will be able to serve it, but not drink it! The mayor of Italy has requested that the cast not be filmed drinking alcohol in public — and that includes in bars and clubs! They have also been banned from filming in several historic landmarks.

Controversy aside, the crew was greeted by thousands of fans waiting outside their new home in Florence. Both the guys and the girls toted an amazing amount of luggage to their rooms.

Snooki was spotted carrying in her favorite stuffed animal, a giant crocodile named Crocodilly, in case she gets homesick.

Even though the fans showed their support for the Jersey Shore, The Situation’s father spoke out saying the cast “will be shunned.”

“They certainly do not reflect what true Italian heritage is,” his estranged father said. “I don’t think any of them can speak Italian — most of them can’t speak English, if you listen to ’em!”