Whitney Houston has checked into rehab, and it turns out daughter Bobbi Kristina is in rehab, too. Now Whitney and Bobby Brown are blaming each other for their daughter’s problems. 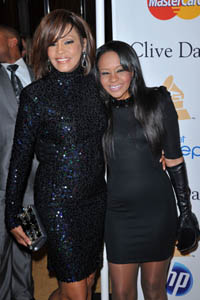 In March, photos of Bobbi Kristina, 18, allegedly snorting cocaine appeared in the National Enquirer. The May 23rd issue of the magazine, Celebitchy reports, reveals Bobbi Kristina, who goes by Krissi, was forced to enter rehab by her mother.

“If I go to rehab, you’re going, too!” Houston is reported to have told her daughter. “But Krissi… shrieked back that she wasn’t going alone!” The battle continued with Houston declaring, “You’re ruining the family name! Whether you like it or not — you’re going to rehab!”

As of today, both women are reportedly in two rehab facilities in Malibu, California that are 15 miles from one another, and they are allowed to go home at night.

It’s too soon to say what will happen, but hopefully mother and daughter will share sobriety in common down the line.