In what sounds like news from a land far, far away, the storybook romance of Lily Aldridge and Caleb Followill has culminated with a wedding. The Kings of Leon rocker wed the Victoria’s Secret model on Thursday night. 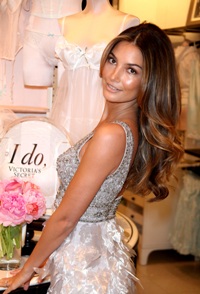 Congratulatory wishes are in order for newlyweds Lily Aldridge and Caleb Followill. The supermodel exchanged vows with the Kings of Leon rock star last night in a ceremony in Santa Barbara, California. Speaking after the wedding, Lily told one reporter, “Caleb is the man of my dreams. And you can quote me on that.”

Caleb Followill proposed to Lily, whom he met at the Coachella Music Festival in 2007, last September. While the wedding plans were being made, the 25-year-old supermodel took the unusual step of purposely keeping her groom-to-be ill-informed.

“You have to ask Lily [about the wedding date],” the Kings of Leon singer told People earlier this month. “She won’t tell me. I think it’s somewhere between May 10 and May 20, but she won’t tell me because I have a big mouth.”

Seems Lily let Caleb in on the date just in the nick of time. No word yet on whether Caleb’s bandmate-brother Jared had any luck getting to know Lily’s Victoria’s Secret friends. Before the wedding, the 24-year-old joked, “I just hope she invites all of her model friends [to the wedding]. That’s the only reason I’m going.”

Congratulations to Lily Aldridge and Caleb Followill, and best wishes for many years of wedded bliss!