Celebrity Apprentice‘s Marlee Matlin is not immune to the stresses of making ends meet. The award-winning actress is working to pay back $50,000 to the IRS in back taxes.

Actress Marlee Matlin has fought off Donald Trump in the Celebrity Apprentice boardroom, and now she is fighting off Uncle Sam. Matlin joins a long list of celebrities that owe the IRS, including Sharon Osbourne, Val Kilmer and Nic Cage. 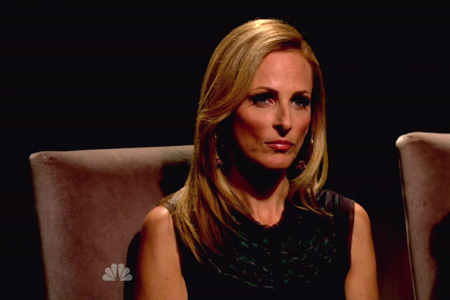 “I’m paying it back. I’m not shying away from it and I’m certainly not ashamed of it,” Matlin tells People. “It doesn’t mean I’m a bad person. It’s reality. It’s the reality that a lot of people in America are facing.”

Matlin, who won an Oscar in 1986 for Children of a Lesser God, admits that being an actress does not mean a steady income and it can be difficult to budget. She said she does not live an extravagant lifestyle.

“Living modestly in a suburban neighborhood while trying to support four children through private school is not extravagant or living large,” she says. “My husband is a Los Angeles area police officer and between the two of us we have always made ends meet in the past — and we will in this circumstance as well.”

In fact, the family plans on making some big changes, including selling their house and switching the kids to public school.

“At the end of the day, it’s about the best interests of the children,” Matlin says. “Transitioning out of a private school environment will certainly relieve some of the financial pressures but hopefully this will not compromise the kids.”

The actress, who is hearing impaired, sounds like she is keeping a positive outlook on it. “I’m not broke. Like everybody else, I owe money. My family is healthy and happy.”