Charlie Sheen is already talking about Ashton Kutcher taking his place on Two and a Half Men — and dude is a warlock when it comes to back-handed compliments. 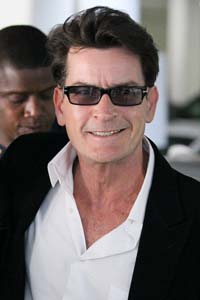 Need lessons in the art of the finely-crafted diss? Look no further than Charlie Sheen. The actor has already issued a statement on the news that Ashton Kutcher is officially joining Two and a Half Men as his “replacement” — and while he says Kutcher is talented, he also basically says he isn’t talented enough to save the show.

“Kutcher is a sweetheart and a brilliant comedic performer… Oh wait, so am I!!” Sheen told TMZ.

“Enjoy the show America. Enjoy seeing a 2.0 in the demo every Monday, WB,” he continued, basically saying the revamped Two and a Half Men is going to bomb in the ratings, Ashton or no Ashton.

While he was at it, Sheen made sure to get a dig in against his archenemy, show creator Chuck Lorre.

“Enjoy planet Chuck, Ashton. There is no air, laughter, loyalty, or love there,” the warlock stated.

Can’t imagine why the guy wouldn’t hire Sheen back.