Heidi Montag says she is living a life with more privacy these days — except, of course, for the new reality show she’s on and all the paparazzi shots she arranges and interviews she gives. 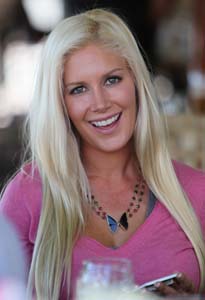 Hasn’t it been a lovely, quiet six months without the constant barrage of Heidi Montag plastic surgery stories or Spencer Pratt looking like a deranged serial killer on tabloid covers while waiting at the checkout line? Well guess what, suckers — they’re back.

Heidi Montag is in the midst of filming a new reality show for VH1, but this one is ostensibly not focused on interpersonal drama (yeah, right). Called Famous Food, the show focuses on Montag and a bevy of other reality stars — like The Bachelor‘s Jake Pavelka and Danielle Staub of Real Housewives of New Jersey — as they launch a new restaurant.

Now Montag wants us to believe she wants her life to be shoved in our faces a lot less.

“From now on, I’m going to keep my life a little more private,” she told People at the grand opening of the restaurant featured in the show, Lemon Basket. “I think I was just doing The Hills for so long and I just needed a break [from Hollywood]. Plus, I enjoy my privacy.”

Generally, people who want their privacy don’t participate in reality shows. We’re just sayin’. At least Spencer Pratt seems to be keeping quiet for the time being.