Funnyman Mike Myers is going to be a father! The actor and comedian will very soon have his own ‘mini-me’ to look after. 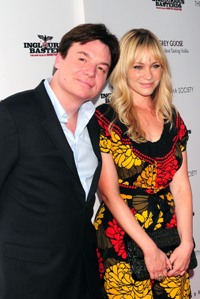 Mike Myers, the man behind beloved characters Austin Powers and Shrek, is about to take on a new role: Father. The 47-year-old and his new wife, Kelly Tisdale, are having a baby. Oh be-have!

A tight-lipped rep has confirmed the Mike Myers baby news, saying only, “I can confirm they are expecting a child.” The New York Post reports that Kelly is already in her second trimester and has a noticeable baby bump.

For the most part it appears the smiling lovebirds stay out of the spotlight. Mike and Kelly are seen here together at the Inglourious Basterds premiere in 2009. The ‘International Man of Mystery’ and his blonde beauty dated for four years before marrying in the fall of 2010.

This will be the first child for Mike Myers, who was previously married to Robin Ruzan for 12 years, divorcing in 2005.

Congratulations to the parents-to-be and best wishes to Kelly for an easy pregnancy and delivery. Something tells us Mike Myers’ baby is going to grow up with the best bedtime stories ever!