Tilda Swinton thinks the way childbirth is portrayed in the movies is a joke and can be damaging to women when faced with reality. 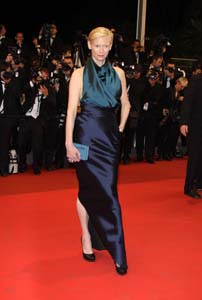 Swinton, who is currently in Cannes promoting her new film We Need to Talk About Kevin, has twins of her own and knows childbirth is actually pretty gross.

“In the movies where people have babies and particularly [in] television films, they are sitting in a hospital bed with flowers everywhere, beautifully made up, they have a baby in their arms and it is all very lovely.”

“Anyone who has been in that zone will know it’s a total fiction. It’s a truly, truly murderous business. Giving birth is a violent [thing to go through]. It is a bloody business having a family.”

She’s going to love the Breaking Dawn childbirth scene, then.

We Need to Talk About Kevin has been a hit at Cannes. The film, based on the novel of the same name by Lionel Shriver, tells the story of a mother — played by Swinton — faced with the fact that her son is a sociopath when he massacres students and teachers in his school.