We’ve learned a lot from Oprah Winfrey over the last 25 years, but what does she believe are the greatest lessons learned? Don’t worry, her latest show sums them up perfectly.

The Oprah Winfrey Show decided it was time to take a look back in a nostalgic show fittingly called: Oprah’s Most Memorable Guests: The Greatest Lessons on The Oprah Show. Did you really think we were going to usher the queen of talk out without learning a few more lessons? 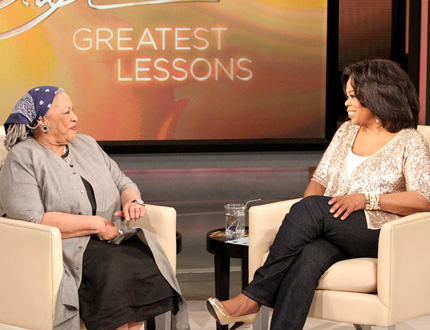 The show brought back some memorable guests that were very powerful, including a group of white supremacists who used Oprah Winfrey’s stage as a platform 23 years ago.

When she pitched the show back then she thought it would be about learning, but the group used it as a platform to spread their word instead. Winfrey realized that no matter how groundbreaking the show was, she would never use the show as a platform in that manner again. Two of the white supremacists joined Oprah on the stage 23 years later to apologize in an emotional reunion.

Another guest from the past that helped moms everywhere was the mother who was so busy in her own life that she left her daughter in a hot car one summer. Her daughter accidently died. Her story reached another mom who was heading in the same direction in her own life and it was a huge wakeup call.

We couldn’t leave the show without a little Oprah “ah-ha moment.” Of course, she quoted Maya Angelou, saying, “When you know better, you do better.”

Oprah admitted that had she not been given the advice that you can’t bring your childhood into your relationship, she and Stedman might not have made it.

What was a lesson you learned from Oprah Winfrey? Tell us, we want to know.