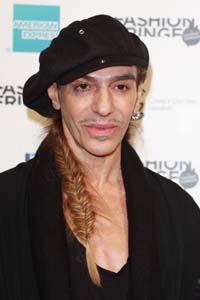 Former Dior designer John Galliano is heading to trial in a hate speech case that could get him sent to jail.

Here in the good ol’ US of A you can bully someone to your heart’s desire and say horrid things to them all under the guise of freedom of speech. In France, not so much. The country has very strict anti-hate speech laws with stiff penalties — penalties the disgraced fashion icon could be facing very, very soon.

John Galliano stands accused of hurling racial epithets at a couple in a Paris cafe. Not helping his case is a video that later surfaced in which the designer talked about how much he loved Adolf Hitler.

Galliano has denied the charges from the get-go, stating that the couple harassed and assaulted him, but that didn’t stop Dior from firing him and Natalie Portman from publicly expressing her disgust.