Season two of The Vampire Diaries has finally reached its epic end. Did Damon survive? Read on to find out.

We’ve been put through the ringer this season with The Vampire Diaries and the finale was no exception. As I Lay Dying brought us full circle with an epic ending that was nothing short of amazing. The theme of the night? It was quite simple — death. Whether it was someone’s actual death or someone being brought back from the brink of death, the episode had it all. 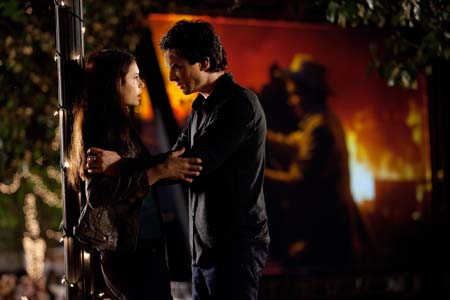 First of all, with Damon (Ian Somerhalder) on death’s door and ready to give up, it was up to Stefan (Paul Wesley) to find a cure for the wolf bite. Stefan and Bonnie (Katerina Graham) called on an old friend to guide them to the cure — Emily Bennett! Guess what the cure was? Our old pal Klaus’ (Joseph Morgan) blood.

He didn’t have to go far, Klaus showed back up. He kept his promise to reunite Elijah with his family — by killing him! First gasp-worthy moment of the night! Klaus killed Elijah and put him in a mausoleum.

With Damon going crazy from hallucinations of Katherine (Nina Dobrev) from the past, it was a good thing Stefan locked him up at the boarding house. Too bad Sheriff Forbes didn’t get the memo. She took the dumbest moment ever to play hero and tried to kill him. Instead of hitting her mark, she let him loose to wander the town! It took him straight to the Mystic Grill where the sheriff tailed him. She took another shot and ended up hitting — wait for it — Jeremy!

Second gasp-worthy moment of the night! Caroline (Candice Accola) tried to feed him her blood but he was already dead. Bonnie wasn’t letting that happen, so she took him to Emily Bennett in hopes of bringing him back to life. She warned Bonnie that it would have consequences but it didn’t matter. In a second, Jeremy was brought back.

TVD: damon gets a kiss while jeremy sees dead peeps

Klaus had one condition if he was going to allow his blood to save Damon. Stefan had to return to his old ways — human blood consumption being at the top of the list. Klaus forced him to guzzle a bunch of blood bags before he presented him with a human girl to feed on. In a moment of desperation, Stefan gave in. Third gasp-worthy moment of the night — we know, there are a lot of them. He’s now pretty much a part of Klaus’ world.

Meanwhile, Elena got Damon under control after a tiny situation with his fangs and her neck. As he was about to drift off into death, the two locked lips! Unfortunately, or fortunately, depending on how you look at it, Katherine showed up with Klaus’ blood. We wanted more Damon and Elena!

With Damon and Elena on the brink of Delena, you fans know what Delena means, we almost forgot about Jeremy. He encountered a few familiar faces at the end — Anna and Vicki! But we thought they were dead! Does this mean they’re back or can Jeremy see ghosts of vampires past? You’ll have to wait till season three!

What did you think of The Vampire Diaries’ season two finale, As I Lay Dying?