Funnyman Ed Helms hosts an all-new Saturday Night Live May 14, with musical guest Paul Simon. SheKnows hopes Helms lures over some of his costars from the big or small screen: How fun would it be to see The Hangover II‘s Bradley Cooper, Zach Galifianakis and Ken Jeong, The Office staffers like Rainn Wilson, John Krasinski and Jenna Fischer, or Jon Stewart and Stephen Colbert get in on a sketch or two?

On the heels of a killer episode featuring host Tina Fey, Ed Helms is set to take the lead on Saturday Night Live for his first time this weekend — and SheKnows is hoping the well-connected funny guy brings along a few friends! 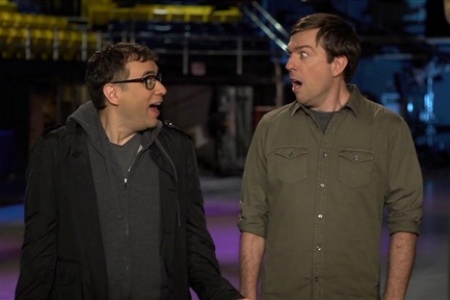 In addition to being a part of the blockbuster The Hangover and the May 26 follow-up, The Hangover II, Helms is a regular on NBC’s The Office. In fact, SheKnows recently theorized that Helms’ Andy is becoming one of the leading contenders for The Office manager, now that Michael has left the building. Speaking of Michael, how about a visit from Steve Carell?

Helms, who got his start on The Daily Show, is also connected to Jon Stewart and Stephen Colbert. The comedian is so dang connected just about anyone funny could show up!

To promote his debut as SNL ?host?, Helms teamed up with SNL castmember Fred Armisen for a string of promos. In one, the guys bond over their rhyming names, Fredward and Edward. Then Helms tries to announce his musical guest, Paul Simon, but draws a complete blank. “Who are you? Who am I? What year is it? Is bread a thing?” he asks. Fredward and Edward clearly have some communication problems — they can’t even manage to meet in the middle for a high five!

Musical guest Paul Simon, who just released his first new album in five years, So Beautiful or So What, will rock out on SNL for the eighth time this weekend. Considering his past visits to SNL, he may even get in on a laugh or two.

Saturday Night Live with Ed Helms and Paul Simon will air this Saturday on NBC, starting at 11:30 p.m.

Justin Timberlake is set to host the SNL May 21 finale, with musical guest Lady Gaga.