It’s a mostly new NBC Thursday tonight, May 12! The Community season finale kicks things off with the epic conclusion of the paintball showdown in For a Few Paintballs More. Dwight tries sitting in Michael’s chair and Kathy Bates guest stars on The Office: Dwight K. Schrute, (Acting) Manager. Then it’s back-to-back episodes of Parks and Recreation, with Fights and Road Trip, followed by the Outsourced wedding finale.

Tonight’s Community season finale picks up just where the show left off last week. With $100,000 on the line, everyone wants to win the annual paintball competition, but the event sponsor has no intention of letting that happen. 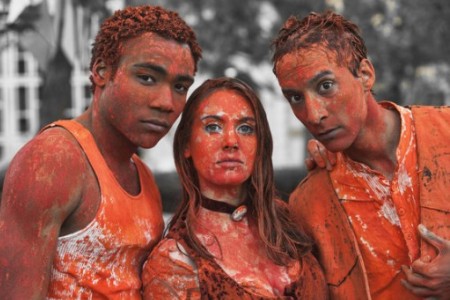 They even hired a ringer (Lost’s Josh Holloway) to win the war in Fistfull of Paintballs, but our fave study group prevailed. In this week’s epic conclusion, For a Few Paintballs More, intruders in white storm the school. Ace of Hearts Annie (Alison Brie), Jack of Clubs Abed (Danny Pudi), King of Spades Jeff (Joel McHale), Queen of Spades Britta (Gillian Jacobs), Ace of Clubs Shirley (Yvette Nicole Brown), King of Clubs Troy (Donald Glover) and the other cards in the Community’s oddball deck must unite to defeat a new enemy.

Then it’s time for a double hit of The Office, with a classic Michael Scott episode at 8:30 p.m., followed by the new episode, Dwight K. Schrute, (Acting) Manager. With no Michael (Steve Carell) or Deangelo Vickers (Will Ferrell) to run the show, Dwight finally gets to take his place in Scranton’s power seat. His draconian tactics don’t go over well, however, which may be why Kathy Bates (Harry’s Law) shows up as the Dunder Mifflin head honcho.

After that, it’s an all new double hit of Pawnee laughs, starting at 9:30 p.m. First, on Parks and Recreation: The Fight, Leslie (Amy Poehler) and Ann face off for the first time in their friendship. The trouble starts when Leslie wants to set up her BFF with a job at city hall. The prospect doesn’t thrill Ann, which propels the girls into their first tiff. Tom’s new Snake Juice isn’t likely to help them work it all out! Tom wants to get his new alcohol out to the people, so he invites the Parks and Rec crew to come out and support him at the Snakehole Lounge, where the girls end up going at it.

Then, on Parks and Recreation: Road Trip, will Pawnee’s super non-couple finally give into the romantic tension? Chris (Rob Lowe) has made it crystal clear that inner-office romances are verboten and thus far, Leslie and Ben (Adam Scott) have done their best to keep their hands to themselves. When Chris sends them on a road trip to Indianapolis, however, he’s just asking for trouble. While Leslie and Ben ride the bumpy road to love, Ron (Nick Offerman) shares his unique views on government with a young student and Tom’s new game causes problems for newlyweds Andy (Chris Pratt) and April (Aubrey Plaza). 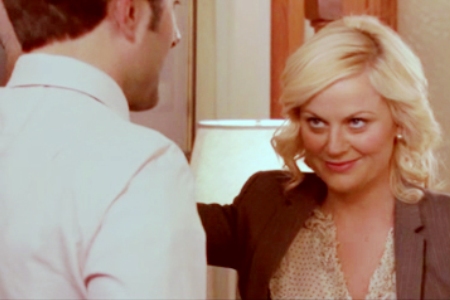 At 10:30 p.m., it’s on to the finale of Outsourced, Rajiv Ties the Bharat, Part II. Rajiv’s wedding day has arrived, but the event is plagued by drama. After Rajiv is caught in a compromising position, he learns his fiance isn’t the woman he thought she was. Todd steps in to save the (wedding) day, while Manmeet focuses on his exciting new relationship. Unfortunately, Madhuri and Asha run into Manmeet’s new girl and learn there may not actually be a relationship, after all.