The act of eating a scrambled egg has brought Ginnifer Goodwin to tears. The actress reveals that she has had to give up her beloved vegan diet for health reasons and she’s begun to eat some (utterly delicious) animal by-products. 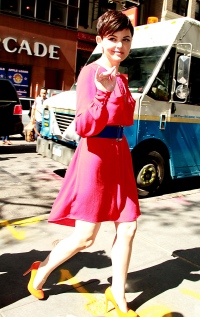 Ginnifer Goodwin has regrettably announced, “I’m not a vegan anymore.” With a heavy heart she explains, “I’m always learning and growing and changing and there were some boring health issues… and so I did actually have to work some animal products back into my diet.”

The 32-year-old, who hasn’t eaten any meat or animal by-products for years, struggled with returning to a vegetarian diet. Her first meal on the new plan? A cruelty-free farmed scrambled egg with a side of tears.

Ginnifer Goodwin explains, “The first thing I ate was an egg that I found from a humane farm… and I scrambled it up. It was the most delicious thing I’ve ever eaten. I felt like a hypocrite and I cried and then I scrambled up another one.”

Recently appearing on the Jimmy Kimmel Live! show, the Something Borrowed star says she now faces changing around, once again, the eating habits of her family, who followed her into veganism. She laughs, “I go home and say, ‘Are you serious? Let’s get some cheese in this house.'”

Check out Ginnifer Goodwin’s Something Borrowed chat with SheKnows!

Ginnifer was in good company during her vegan days in the Hollywood crowd. Other famous vegans include Casey Affleck, Alec Baldwin, Ellen DeGeneres, Tobey Maguire and Glee star Lea Michele, just to name a few.

Interestingly, Ginnifer Goodwin isn’t the only star to have to give up her vegan diet. Fellow formerly vegan stars include Drew Barrymore, rapper Common, Natalie Portman, Gwyneth Paltrow and Angelina Jolie.