Adrianne Curry appeared on Howard Stern to promote her new reality show. Will you watch? 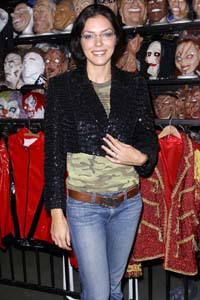 Former America’s Next Top Model winner Adrianne Curry is trying really, really, really hard to remain relevant in today’s entertainment world. And what do desperate entertainment types do when they want to get some attention? They go to Howard Stern!

However, all of the Stern promo clips show Curry “testing” out a sex toy. Double ewww!

“It’s not explicit like you would think that it would be or could be. I think that what you’re gonna see are stories and animation and things that are rooted more in good storytelling, great sense of humor,” Curry told Zap2It of her new show, whatever that means.

She’ll even have a story on there — but guess what? She hasn’t told her ex-boyfriend that she’s telling their story!

“He has no idea. Maybe I should Facebook him and be like, ‘Yo!’ Cause anyone in our hometown that watches this is gonna know who. Everyone knows I only dated one guy really before my husband, so who else could it be?” Curry said of her ex.

She should probably get ready for a lawsuit or at least a cease and desist letter if that’s true.

Oh, and in case you were wondering, her appearance on Stern doesn’t mean that her relationship with former Brady Bunch actor Christopher Knight is on the rocks.

“I love the fact that so many people hate the fact I’m married… clench your teeth and pull out your hair,” she tweeted after her appearance on the show.

Well, it’s good to see that Curry is still very full of herself. We do admit that she is a beautiful girl, but her attempts to shock people are, well, annoying.

Will you watch Adrianne Curry in Celebrity Sex Tales?