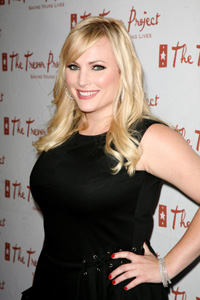 Meghan McCain is getting naked for a cause! The daughter of Arizona Senator John McCain joins other celebrities, including Brandy, Tatyana Ali and Danielle Fishel, to raise awareness for skin cancer.

“My mother would be so ashamed,” says McCain in the video.

Both of Meghan’s parents, Cindy McCain and John McCain, have suffered with skin cancer which prompted Meghan to do the ad.

She later said that although she appears to be naked, she is actually wearing a “strapless juicy tube dress.”

Glenn Beck enjoyed poking fun at Meghan’s ad on Wednesday’s show. “Put some extra clothes on,” he said, as he made exaggerated vomiting sounds. “Like, lots of extra clothes… has she thought about a burqa, just to be extra safe?”

Cindy McCain quickly defended her daughter, tweeting: “I’m so glad Glenn Beck is leaving Fox. Enough vitriol and hate. Glenn you are no rodeo clown. They are decent and nice. You aren’t.”

Meghan also struck back at Beck in her column for the Daily Beast. “Clearly you have a problem with me, and possibly women in general, but the truth is, it’s 2011 and I heard your show on Fox was canceled,” she wrote. “Isn’t that an indication that the era of the shock jock pundit is over?”

“There really is no need to make something like my participation in a skin cancer PSA into a sexist rant about my weight and physical appearance, because I’m going to let you in on a little secret, Glenn: You are the only one who looks bad in this scenario, and at the end of the day you have helped me generate publicity for my skin cancer PSA, a cause that I feel quite passionate about.”